If you are interested in QA and also have a passion for video games, keep reading! In this blog post, we will see how the role of QA Engineer fits in game development and how it has evolved over time in the video games industry. We will also dig into some of the most interesting challenges QA Engineers face every day and how they can be solved using different tools.

Abbreviation QA means Quality Assurance. The basic goal of a QA Engineer is to provide an adequate quality of an application.

In the past, the role of QA Engineer was tied exclusively to the last phase of testing.

Similar to other roles, the role of QA Engineer is constantly evolving, especially in the gaming industry. QA Engineers are now becoming more actively involved in all phases of product development.

When it comes to testing, QA Engineer not being the only role in the team dedicated to testing has shown very effective in practice. Today, in the majority of gaming companies, a QA engineer is the role that leads the testing process involving the whole team while doing so. The task of QA engineers is to broaden the quality mindset and provide tools and environments so the whole team – developers, but also game designers, graphic designers and others, can test the product quickly and efficiently.

In order to illustrate some specific aspects of the QA Engineer role in the gaming industry compared to the rest of the software industries, let’s take a look at a traditionally hot topic of automation.

It is true that video games testing is generally more difficult to automate compared to other app software. Some of the reasons are the presence of a large amount of graphics, complex user interaction with the game, etc.

In the following example, we can see the situations from testing the game Heroic: Duel of Legends. Engineers have developed the tool with which we enter the command on a PC, it is sent to the application on the mobile device and then executed. Let’s say we want to test the usage of different cards that represent magic. At the beginning of the video, we see that most of the cards are locked. After entering the command, all cards become unlocked. So the person testing does not have to unlock the cards by manually playing a game which could take hours.

In a previous example, we saw a semi-automated tool that makes the life of engineers or anyone else testing the game much easier. When working on automation, we should always think of semi-automated tools and commands as well – they can often be easy to make and very efficient.
In the next video, we can see the fully automated system in action, testing the Top Eleven game.

The application is automatically installed on several mobile devices. Then automated tests are run. In this specific example, user actions are simulated – dragging players to different parts of the pitch. After each drag, the screenshot is taken automatically and compared to the reference screenshot. If there is any significant difference, a bug is automatically reported to the engineers.

In this way, QA Engineers do not have to manually test graphic changes of every part of the application. Any visual bugs detected will be reported automatically. In the following image, we can see what the web page that logs a bug looks like: 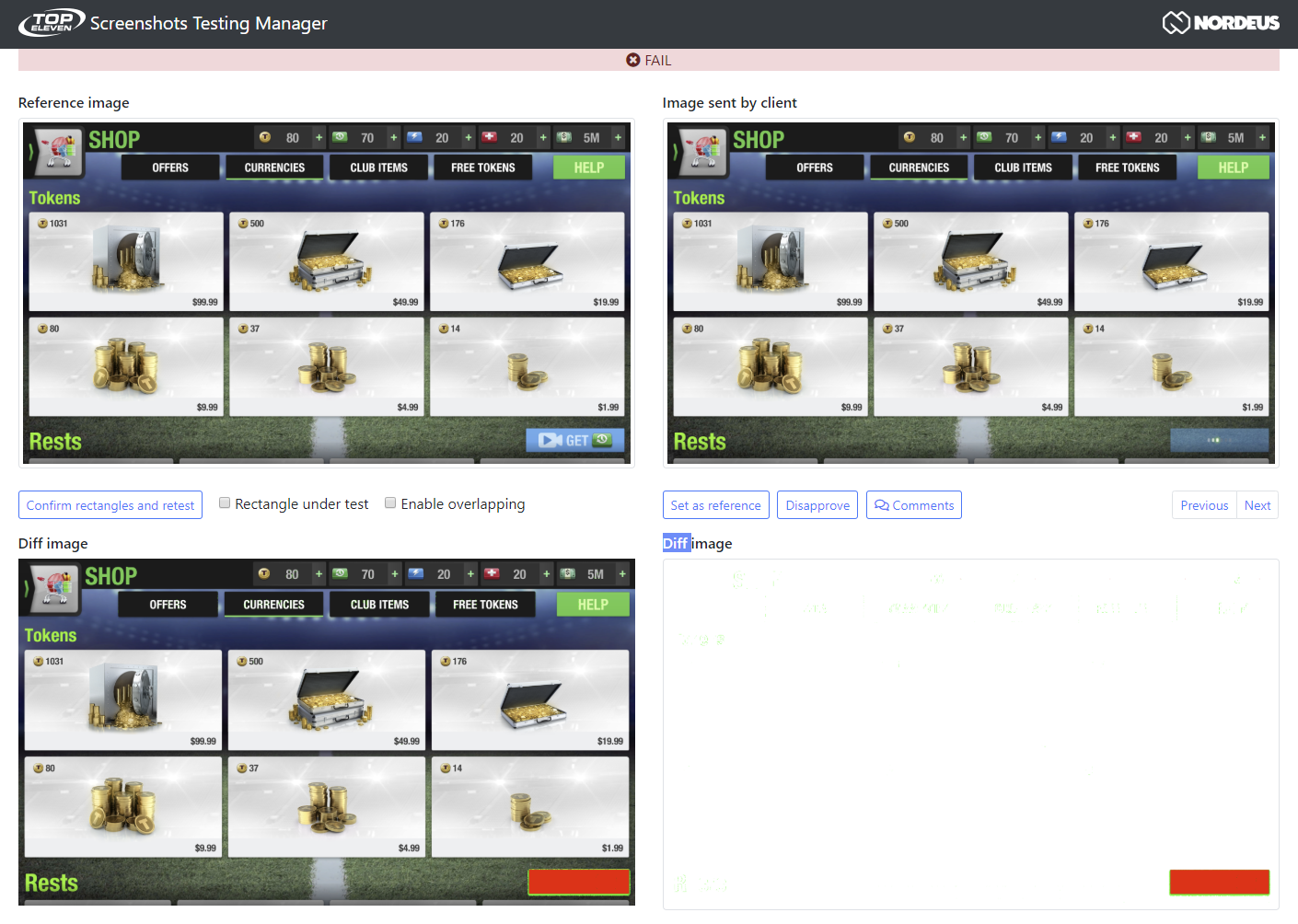 In the upper left part, we can see the reference image- what a specific screen should look like. In the upper-right part, we see how the same screen actually looked during the test. In the images below, we can see the differences marked with red pixels. In this concrete example, it is easy to see that the bug has been reported because the light blue button with the text “GET” has not been loaded properly.

This button appears in many places in different parts of the app, on different screens. Manual testing of these components on all screens would be extremely time-consuming. Thanks to automated tests, we can easily find problems similar to the one above without the need for manual testing.

We looked into some of the specific aspects of the QA Engineer role in the video games industry. The role has dramatically evolved in the last several years through organizational, toolset and mindset changes, some of which we covered here.

If you are reading this blog post thinking “This is me!”, make sure to check out our open roles!