BELGRADE, Serbia – April 5, 2018 – Today, Nordeus – the independent games studio – announced a partnership between Top Eleven and Cardiac Risk in the Young (CRY), that will see Stoke City players wear their hearts on their sleeves as the charity takes pride of place on the shirt for their Premier League game against Tottenham Hotspur.

In a first for the Premier League, a club sponsor has donated their shirt sleeve spot to another organisation for the match taking part on Saturday April 7, 2018. The gesture has been made to help CRY raise awareness that every week in the UK, around 12 young people (under the age of 35) die suddenly from a previously undiagnosed heart condition.  A staggering 80% of these will have shown no previous sign of heart defects until it is too late – which is why CRY believes screening is vitally important. 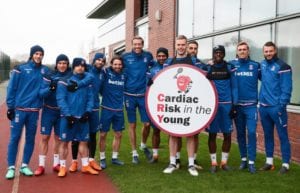 CRY’s screening programme is overseen by charity’s Consultant Cardiologist, and Spurs fan, Professor Sanjay Sharma (St George’s NHS Trust) and now tests around 27,000 young people across the UK every year. One in every 300 of the young people that CRY tests, will be identified with a potentially life-threatening condition. Playing sport – whilst it does not actually cause sudden cardiac death – can significantly increase a young person’s risk if they have an underlying heart condition.

CRY’s Chief Executive, Dr. Steven Cox; says; “We are so honoured to have been invited to become involved with this prestigious partnership – despite the split allegiances of our very own Professor Sharma on the day!

“We know it will be a poignant yet very powerful day for our two families attending as a fitting tribute to their sons, Daniel and Jordan. Yet, we also know that their involvement will raise huge amounts of awareness for CRY and empower their own personal commitment and ongoing work to prevent other families from ever having to endure the same level of grief as they have.”

Two affected families, who work closely with the charity, have been invited to the match as guests of Top Eleven and the club. The Hughes family will take part in a half-time interview to help drive awareness. Since 2015, when their son Daniel died suddenly from an undiagnosed heart condition, they have raised around £150,000, leading to the screening of 996 local young people in his memory.

“Getting the message out to people about the dangers of undiagnosed Heart defects, and the benefits of heart screenings are key to the work that Cardiac Risk in the Young do, so the exposure that this event will give to the charity is invaluable,” said Dave Hughes, Daniel’s father. “Our son Daniel was a season ticket holder and lifelong fan of Stoke City so we are immensely proud to be asked to represent CRY on his behalf at an event with such prestige as this, it is a fitting tribute to him and one we will treasure.”

Daniel was a keen footballer for Alsagers Bank and previously for Audley and Bignall End. He was a season ticket holder for his beloved Stoke City and worked as a postman – until his tragic death. The Daniel Hughes Memorial Fund look set to continue funding further screenings in the area.

Family and friends of Jordan Burndred will also be welcomed to the stadium on April 7. Jordan – also a true Stoke City fan – was just 17 when he tragically died, also from a previously undiagnosed heart condition in 2015. Since his sudden death, his mum Nicola has raised £75,000 for the screening of hundreds of young local people.

“Jordan played football for Leek Town FC and refereed for Stoke City Academy at the weekends,” said Nicola Burndred, Jordan’s Mother. Adding, “He was a lover of the sport and was hoping to further himself by becoming a professional referee. He was also a season ticket holder for many years at Stoke City FC.”

Football fans around the UK are encouraged to text ‘STOKE 5’ to 70085 to make a £5 donation*. Funds raised will go toward the screening process that is carried out across the country.

“Top Eleven became the shirt sleeve sponsor for Stoke City this season as we saw very close alignment with the club’s community and charitable work. We want to help realise that spirit, so we’re incredibly proud to be able to offer this opportunity to CRY,” said Tomislav Milhajlovic, Chief Marketing Officer at Nordeus. “We’ve been so moved by the stories we’ve heard and can only hope that this can help the charity to build awareness and raise the funds needed for the screenings across the UK.”

Stoke City’s Chief Commercial Officer Paul Lakin said: “As a Club we are proud to be playing our part in raising the awareness of Cardiac Risk in the Young – a condition that tragically affects so many people across the UK.

“Top Eleven’s decision to hand over their shirt sleeve sponsorship for such a high profile Premier League fixture is a fantastic gesture and we look forward to welcoming representatives of CRY to the bet365 Stadium.”

If the keyword or shortcode you text are invalid, you may still be charged your standard network message charge but will not be charged for the donation as no donation to CRY will be made. You must obtain permission from the bill payer before sending a text message. If you are under 16 years old, you must have your parent or guardian’s permission to send a text donation to CRY.