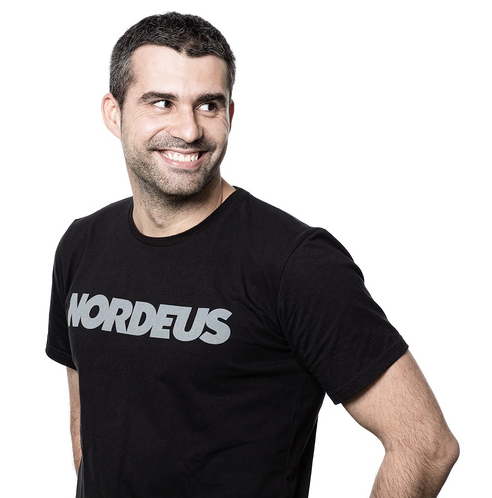 The timer says there are only 5 seconds left to the end of the match. One inch behind the three-point line, the player takes a quick look at the scoreboard while he bounces the ball: his team is losing by 2. Nothing but silence and the basketball hitting the hardwood court, rhythmically, like a clock ticking. 3 seconds. 2. Slowly he rises, his arms drawing a launchpad. Less than one second left. He throws the ball. The crowd is mute. The buzzer blasts. 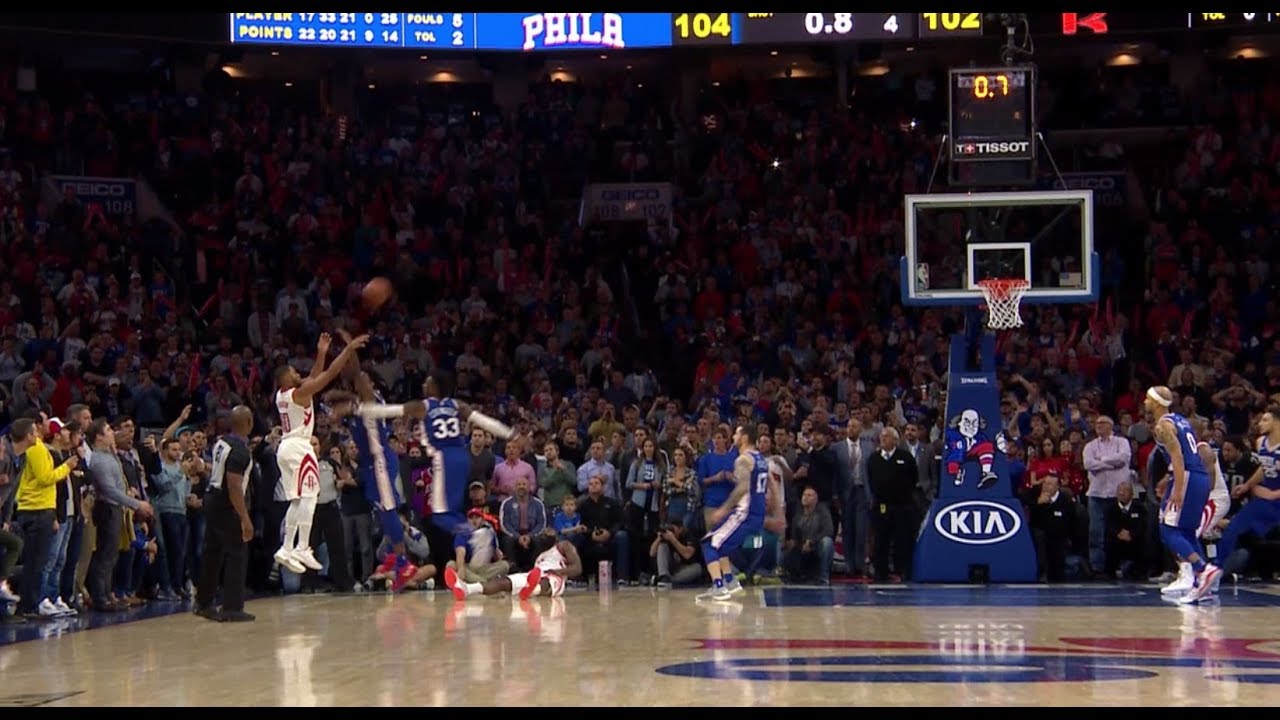 Every game has a beginning and an end. One day a player will start playing it and at some point later, they will be done with it. Because they completed it, or just because they considered the journey over. What happens in the meantime, how that game journey was, can be very different from one player to another. That uniqueness when it comes to each player’s experience is one of the things that most typically define video games in opposition to other media. Let’s take a film as an example. What it delivers is previously filmed content that doesn’t change from one viewer to another. There is no interactivity. It’s legitimate to say that, even if the content is the same, the effect it produces on each specific viewer, how they interpret it, may vary immensely depending on backgrounds, previous experience, knowledge or biases. But that’s a further discussion, so let’s stick to the fact that, in video games, the player can change the content itself.

A Game Designer, different from a book writer or a filmmaker, doesn’t write or film a game in which all players will go through the same journey. It’s more about setting up a space, with some characteristics and rules, within which the players will be able to roam somewhat freely. A space of possibilities. The path a player chooses to take within the game is typically called a trajectory. And each player’s journey through the game is a different trajectory. 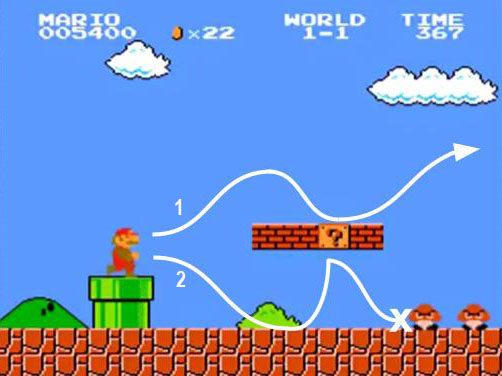 Now we are Super Mario, standing on the top of that green pipe.

There can be as many trajectories for a game, or a level, as players who play it. On one player’s trajectory, not only did they hit the Question Mark Box, but also they jumped onto the goombas, successfully removing them from the picture. On another player’s, they tried to go backward, left of the pipe, then forward again, then hesitated and waited for a few seconds…That generates the often praised experiential uniqueness of games. Each player writes their own story. But more often than not, the Game Designer knows there is one trajectory that is better than the others. Because some trajectories can be frustrating. Because there is one that is more rewarding for the player. Because it better showcases the marvels of the game. Because it’s more fun. That’s usually called the golden path.

But, in video games, you cannot simply force players to do what you, as a Game Designer, want. There is a tension between two very positive things you want in your game: freedom of choice, and some control over the players’ trajectories to give them the best possible experience.

To answer the recurring question of what a Game Designer’s job is like, I started using the minister metaphor. I know it may sound funnily pretentious, but that is probably why I like it.

Imagine you are a minister with the agency to make decisions that affect a large group of people. Imagine you are the Minister of Fashion in a country we’ll call Fashionia. And one of the main goals in your agenda is to make people wear flip-flops in winter. Because it’s trendy. That’s the golden path for Fashionia’s society. But making flip-flops mandatory in winter is not the way to go. It’s not fashionable. People should be able to wear whatever they want. 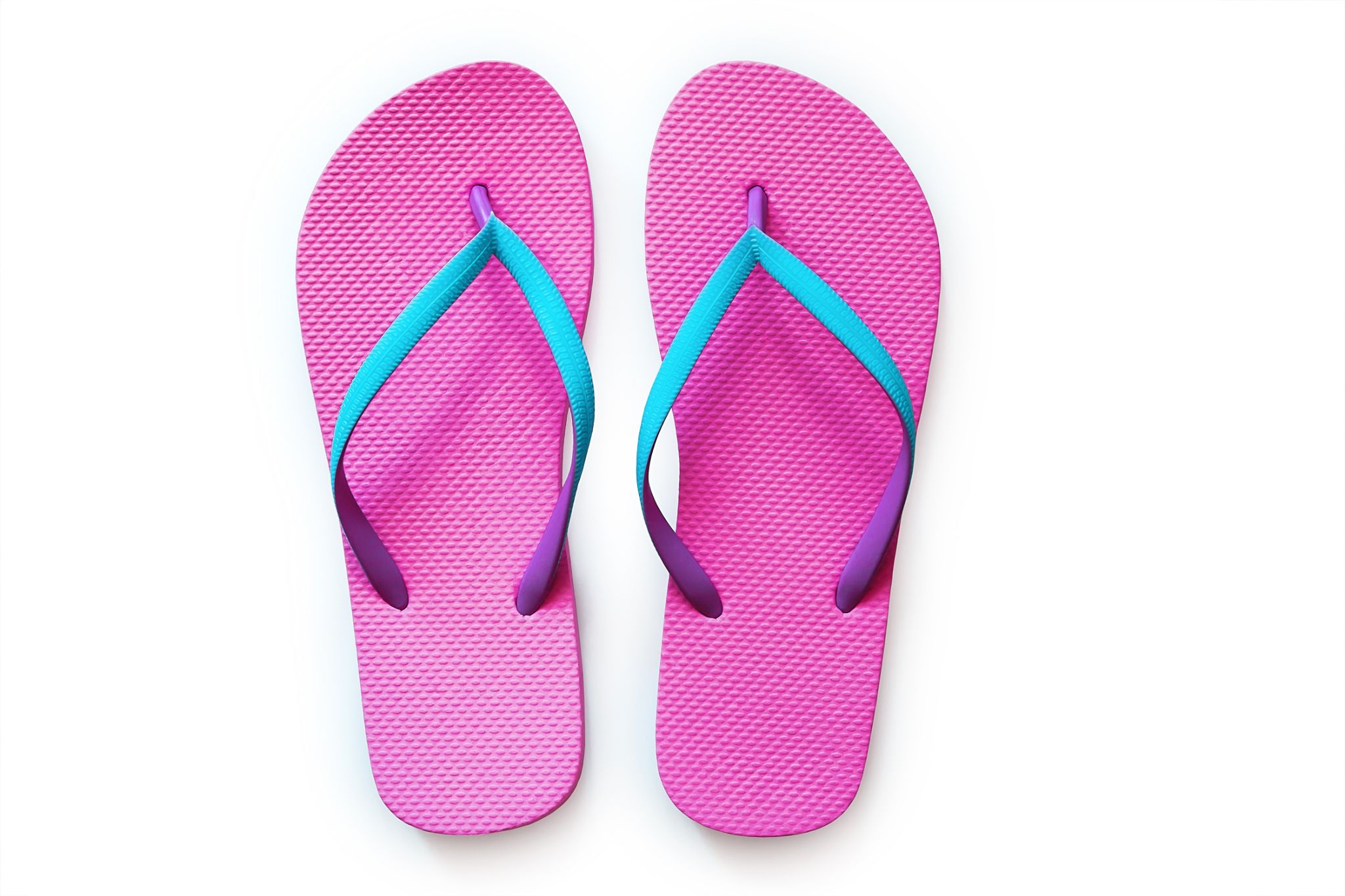 What measures could you take to encourage people to wear those fancy flip-flops in the winter?

Hopefully, by applying these measures, more people in Fashionia will walk the golden path in those lovely flip-flops. As you can see, it’s all about taking indirect measures that, if they hit the mark, will stimulate a specific behavior in people exposed to your design.

A DESIGN IS AN INVITATION

Now imagine you are designing a game that is set in a post-apocalyptic town, bursting with zombies with an appetite for brains. The player’s character’s brains. The goal for each level is to survive the journey from point A to point B.

Depending on the design decisions made, the game experience will be totally different, even if the core premise remains the same.

By using these mechanics and rules, the designer is encouraging players to play in a very certain way. It will generate a gameplay experience of power, which will be enjoyed the most if the player follows the golden path. This path will probably involve playing aggressively and mastering the mechanics of spatial control, aiming and shooting.

Now let’s change some mechanics and rules for the same core concept.

Altering some elements, the designer is setting up a totally different gameplay experience. Now the golden path will make the player move carefully, explore the level to find more bullets and plan encounters with enemies more tactically, avoiding them whenever possible. The best possible game experience emerges from playing stealth. Survival horror in a nutshell. 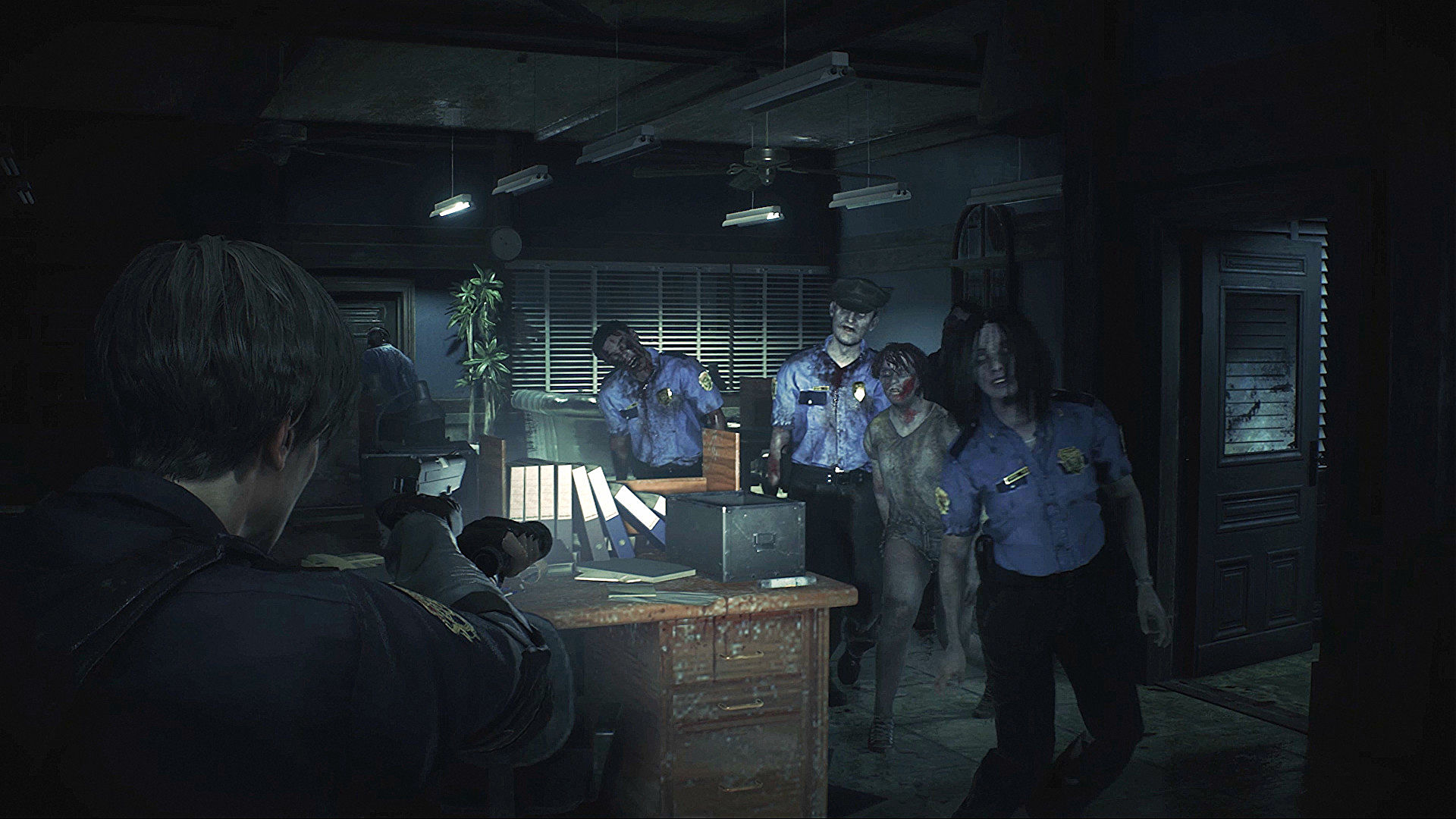 A Game Designer works to give players a space that they will inhabit following their free will. But at the same time, the Designer will be inviting them to behave in a way that generates the best possible experience. The most fun one, if you like. Not forcing them but guiding them. As the Minister of Fashion did with the flip-flops.

Respecting the flavor of real football is a key principle when we design features for Top Eleven. Our players are looking for a true-to-reality football experience, with a focus on strategic choices and managerial decisions. It’s not an arcade football game where you would expect the player to execute a combo in order to perform a bicycle that will tear the back of the net apart. It’s more about mastering the tactical aspects of matches and making the big decisions that will determine the fate of an elite football club.

In Top Eleven, matches actually feel like relevant events: they are synchronous, which means that two opposing managers meet and size up at a specific real-world time.

Being present at a match, as a manager, is not mandatory. Pre-match preparation and set-ups will play a critical part in the outcome of a match. But we believe that being there, watching it and making live tactical decisions that adapt to how it develops, should be a fairly important part of the experience. The design answer to that experiential goal was sideline instructions. The manager can adjust their team’s playstyle during the match, depending on what’s happening on the pitch. Are they losing by 1 in the second half? Give the instruction to focus on Attack now. They feel superior to their rival and there is no hurry to score? From the sideline, the manager tells their players to focus on Possession. 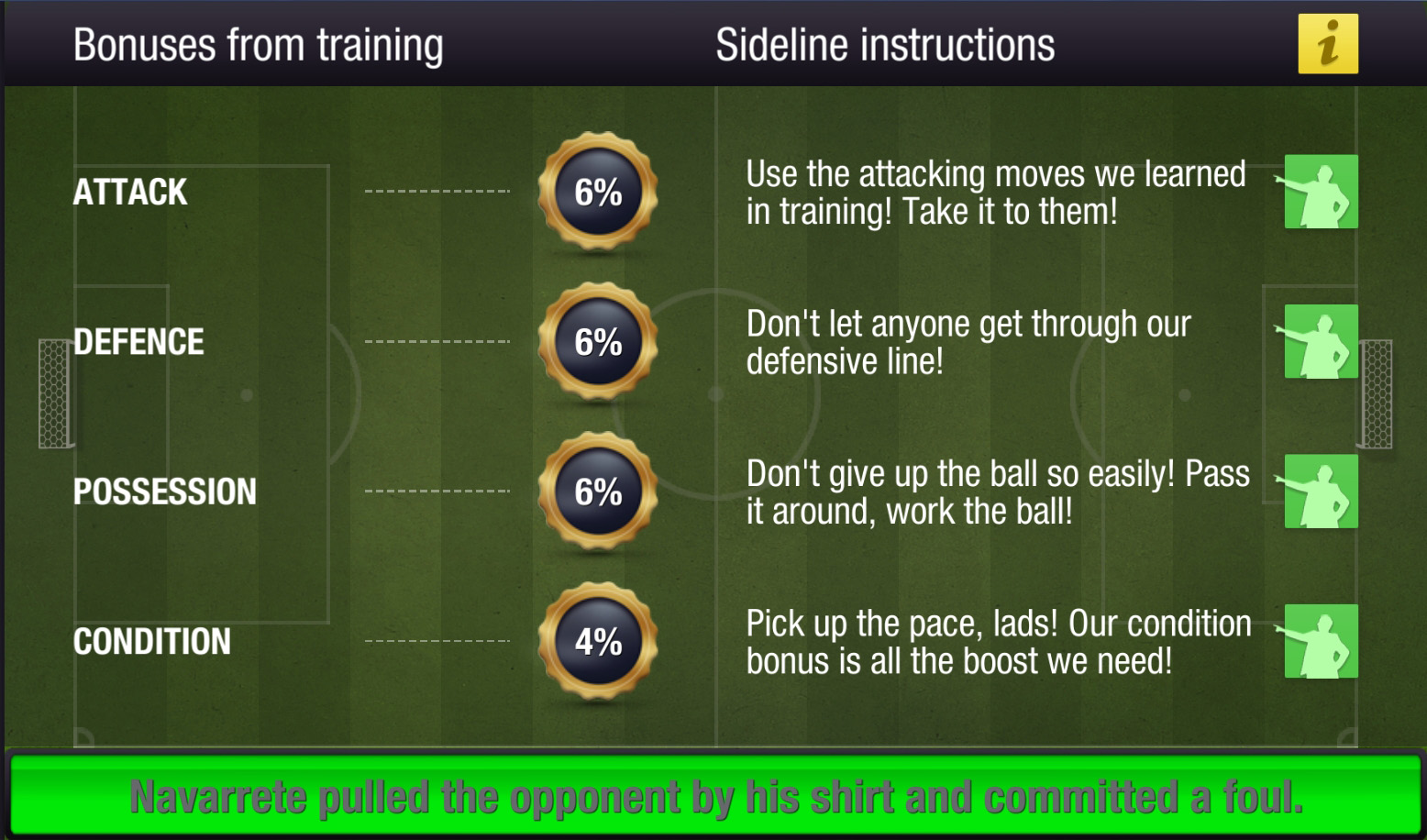 This moment-to-moment reaction mechanic provides a new layer of gameplay to those managers who are present during the live matches. It’s an invitation to be there, to have a more fulfilling experience. But it’s not just a functional mechanism. It also fits the fantasy of the game.

Besides trying to find that sweet spot between freedom of choice and guidance that we talked about before, there is a third dimension the Designer needs to take into consideration when crafting a game experience: authenticity. And this holds especially true when the fantasy of the game is connected to real-world things the player knows first-hand, like football.

This way of designing experiences encompass the big decisions, like sets of rules, level design, general systems… But also the more subtle ones. Sometimes the small details will be the ones that really make a difference when it comes to how a person will experience a game.

Let’s return to that basketball court, where the match was about to end. The ball is flying from the three-point line. The crowd is silent, holding their breath. The timer reaches 0, and the buzzer blasts just one instant before the ball goes clean into the hoop. The crowd explodes. The player raises his arms, and feels the greatness of the moment all around him.

The very sound of that buzzer was one of those subtle design decisions made by some Minister of Fun. Not only to clearly signal the moment when the match is over. It could have been a shy chime, or a simple beep instead. But if you’ve ever heard the sound of that buzzer, you’ll realize it’s a call to euphoria. To let emotions go. When the golden path, a buzzer-beater to win a match, happens.

Looking for a job? Join us!