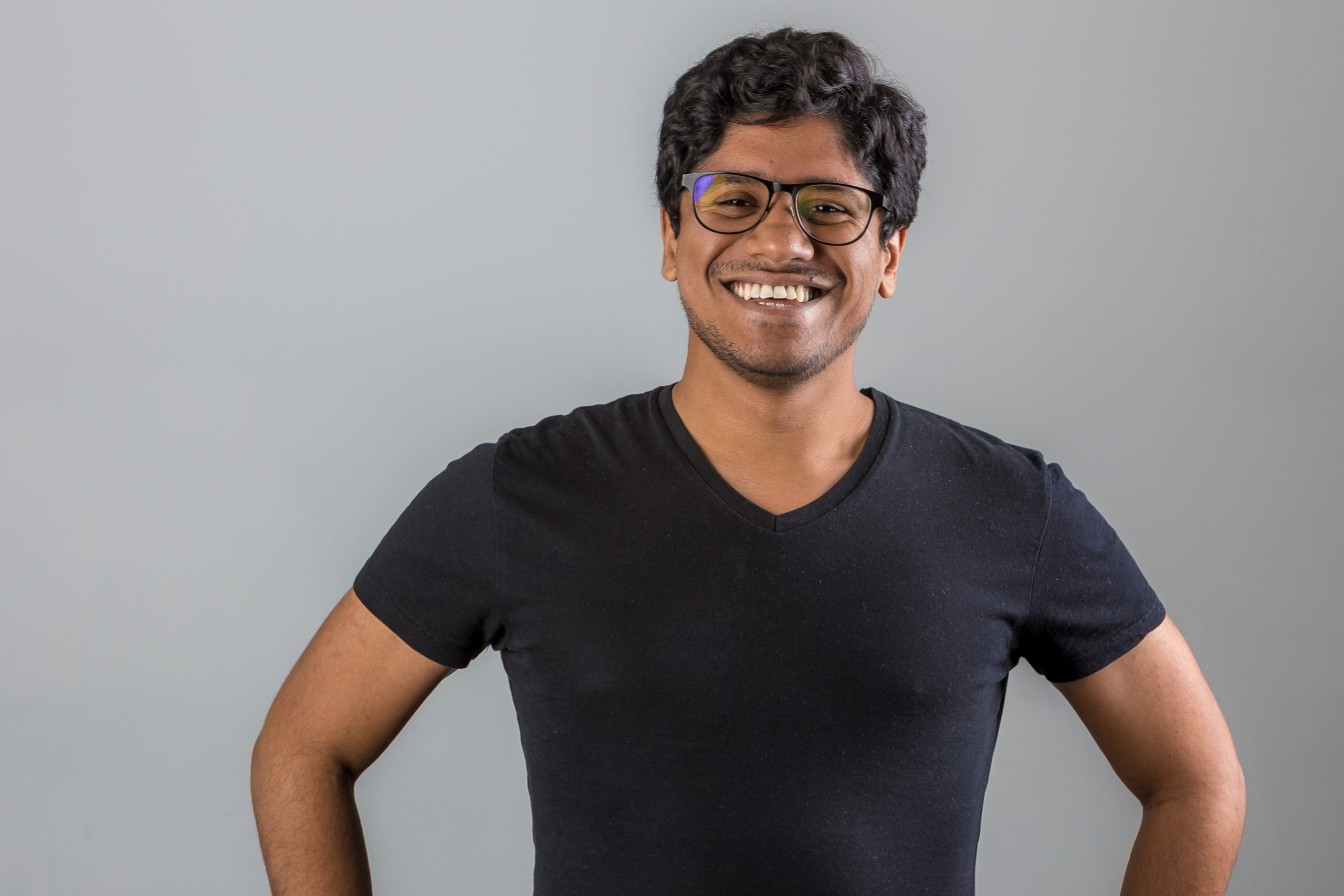 DAY IN THE LIFE OF A GAME DESIGNER

Today is going to be a great day.

You have just finished designing the specs of an exciting idea last night, and you’re eager to pitch it to your team.

In parallel, the team has just finished working on the first draft of an important feature and are eager to sit together to play it.

They are also looking forward to your pitch.

Before you start the day, you consult your Design Donut. 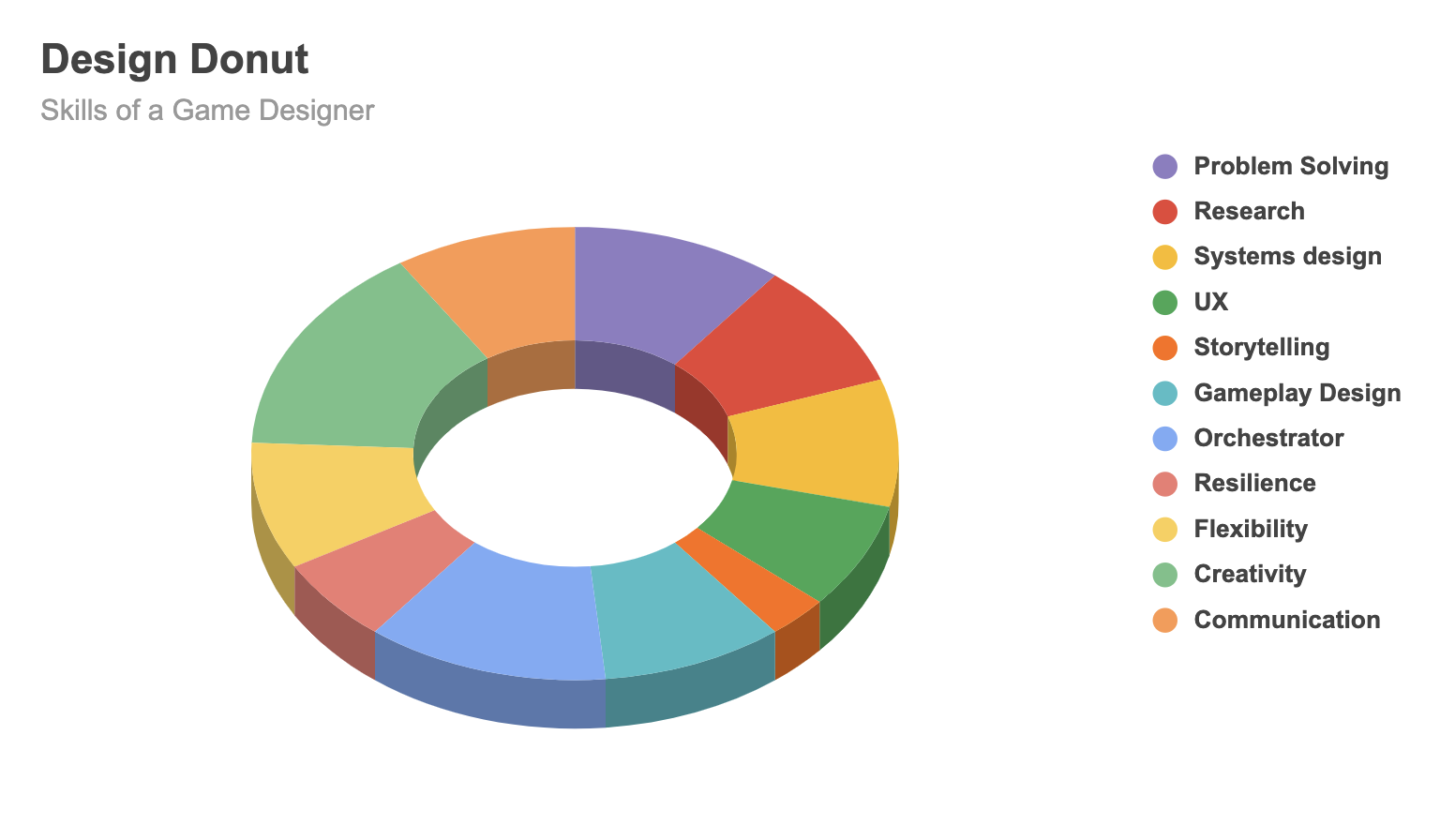 The design donut is a representation of the skills a game designer must possess in order to thrive in the industry and make great games. Moreover, each of these skills will be put to the test – Every. Single. Day.

Your levels seem steady. You are strong enough to take on the challenges the day has in store for you.

You glance at your daily planner. The day starts off with a pitch meeting and ends with a team play session to test the first draft of a feature. You should probably play the build before and tweak it before the team gets a go at it.

10:00 AM | THE PITCH MEETING
COMMUNICATION & STORYTELLING

The meeting is in an hour. You go through your slides to make sure you are communicating your idea the right way. You want them to be excited and in the end, you want their buy-in. Precisely what a door-to-door salesman thinks about before knocking on a door – How best can I sell this air conditioning unit? 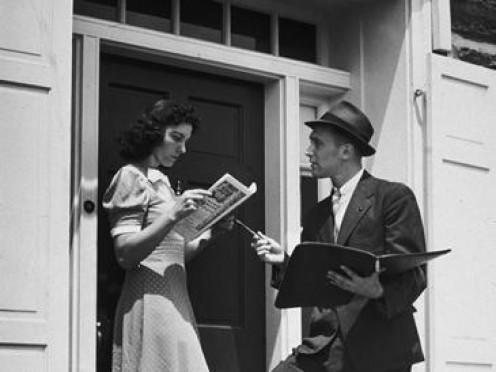 Communication and Storytelling are important aspects used to align you and your team with the idea and how best to execute it. One of the key aspects of a good game designer is their ability to strip down concepts into its nuts and bolts and use that to effectively communicate it to their team and by virtue of which, communicate it to users as well.

You will have to use these skills to inspire, negotiate (with), and persuade your team members. Take a look at this presentation from Elon Musk for a Tesla product called Powerwall 2 back from 2016. It’s a deceptively simple pitch, but it hits all the right notes. He starts off by illustrating the problem, then talks about their approach to solve it, proceeds to describe a vision of a better future, and finally reveals the solution.

So you’ve pitched your idea. You look around the room to gauge everyone’s reactions and you notice that some of them seem doubtful. You ask them what they think, one person asks –  “This seems really risky and unfamiliar. Is it a safe bet for us?”

That door’s about to close… 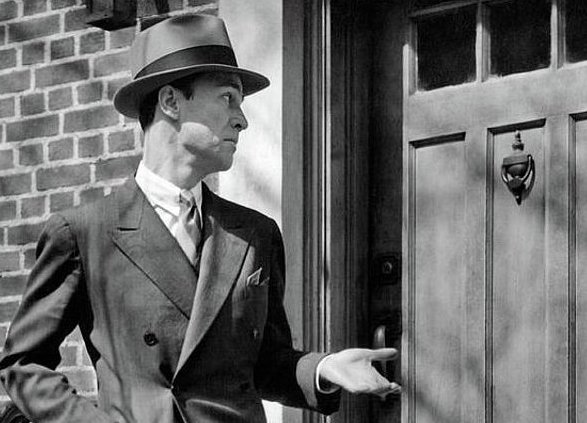 Source: 1950’s door-to-door salesman getting rejected at the door.

A huge part of a game designer’s task is to constantly research other games and deconstruct them so that you’re able to find potential problems and solutions that can inform your ideas. Oftentimes, you’ll come across a problem that requires a unique solution. This is where creativity comes into play.

The best way to describe creativity in this context is – The ability to find simple, innovative solutions to problems your team and the game faces. The more you think about a problem, research it, and talk about it, the more likely you are to stumble upon a great idea.

Meanwhile, another person chimes in – “Is this really a problem we need to solve?”

A great game designer is not just a great problem solver, they are also great at identifying the right problems. The ability to accurately describe problems by conducting playtests, looking at data, and finding causation will determine the accuracy and worth of the idea. It also validates whether or not this is a problem you need to solve.

The meeting ends on a high note. The team is convinced that you know what you’re talking about and think the idea is worth prototyping. Now you can carry on with the next task at hand.

The team is currently hard at work iterating on a feature and fixing bugs before the Playsession. You need to make sure everything is up to spec. While playing you realize that it’s not tuned to deliver the right experience. The character’s jump trajectory is off, the opponents are too hard to beat, an audio cue is missing, and the reward for finishing the level is too little. You start to panic.

This is where you channel your inner conductor. 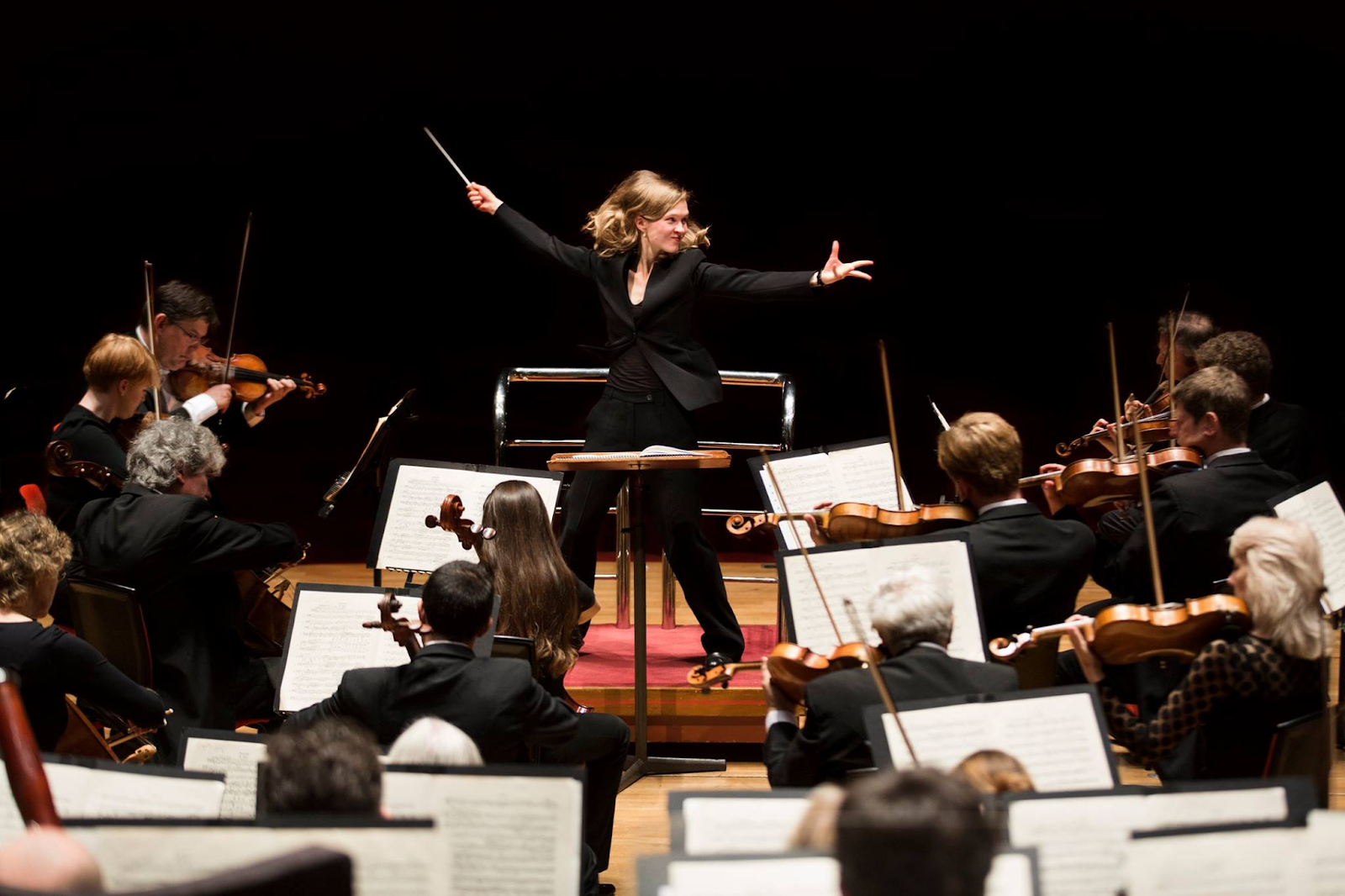 Game Design is often an exercise of control as well as the art of orchestrating your team through accidents. The ability to bring mechanics, art, story, & music together by collaborating with your team is vital. Remember, you are the vision holder for the game and you need to orchestrate an entire team to bring it to life. Without your constant vigilance the game will lose it’s way.

But this in no way means that you have to solely rely on your team to fix it. This is where your hard skills come into play. Depending on the project, most games require intense focus and iterations on the systems and mechanics that make up the basic 3 C’s of a game – Character, Controls, and Camera. Having an in-depth knowledge and experience of building controls, camera systems, and character abilities which include animations, physics, and simulations form the bulk of this skill.

A game designer is also effective at designing systems as well as managing & tweaking game economies to suit their goals and alter player behavior. This includes the ability to break down experiences into its smallest bits and get the team to build tools (which is what we spend most of our time using) to execute the experience.

The ability to communicate your game mechanics and systems to players is also very important. It doesn’t matter if you have the best mechanic or systems, if players aren’t able to understand how it works then it’s going to fall flat on its back. Creating delightful interactions and crafting clear player choices can make a serious difference.

In larger projects, you will be cross-collaborating with several teams, like Gameplay developers, Audio designers, Animators, Concept artists, Localization specialists, and many more. Everyone needs to be aligned on the objective and the decisions being made on a day-to-day basis. 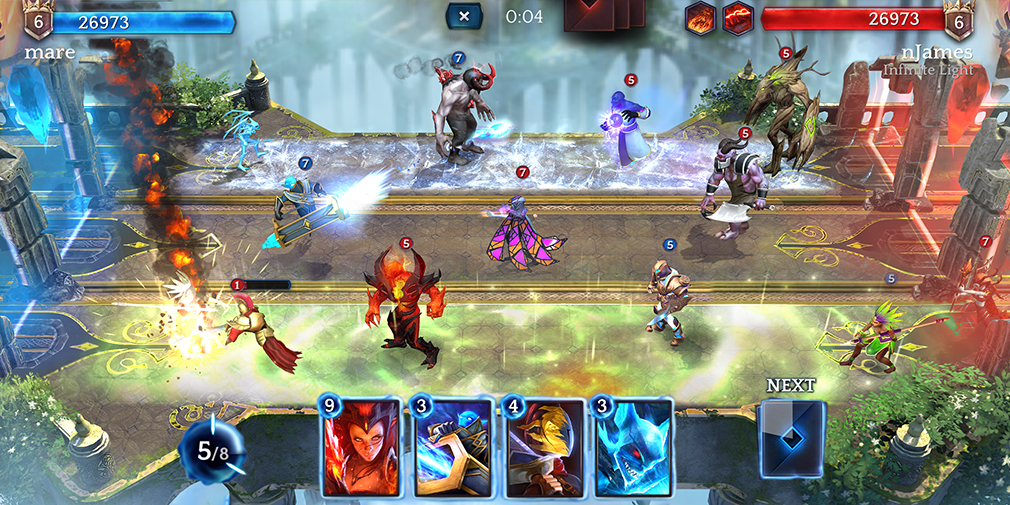 A game designer’s job can vary from studio to studio but here at Nordeus we function with small teams and therefore the responsibilities are larger. On HeroicTM every new minion and spell we created had to go through a strict process of requirements that designers, artists, and developers would set up and iterate upon. Design would lay out rules like gameplay value, balancing requirements, visual readability, quality of visual effect based on rarity of minion, etc…

The art and dev team would then take these forward to prototype mechanics, create drafts of how the minion would look like on both the card and on the battlefield. From then on, we would iterate and choose the best to be featured in the game. Throughout the whole process, we worked with the Community team and Marketing to prepare the Heroic community for the brand new Minion update.

You’ll be constantly tweaking values ranging from the speed of bullets, the health of enemies, inventory sizes, adjusting 3D meshes for level design, to balancing game economies in order to realize the journey you’ve set for the player. 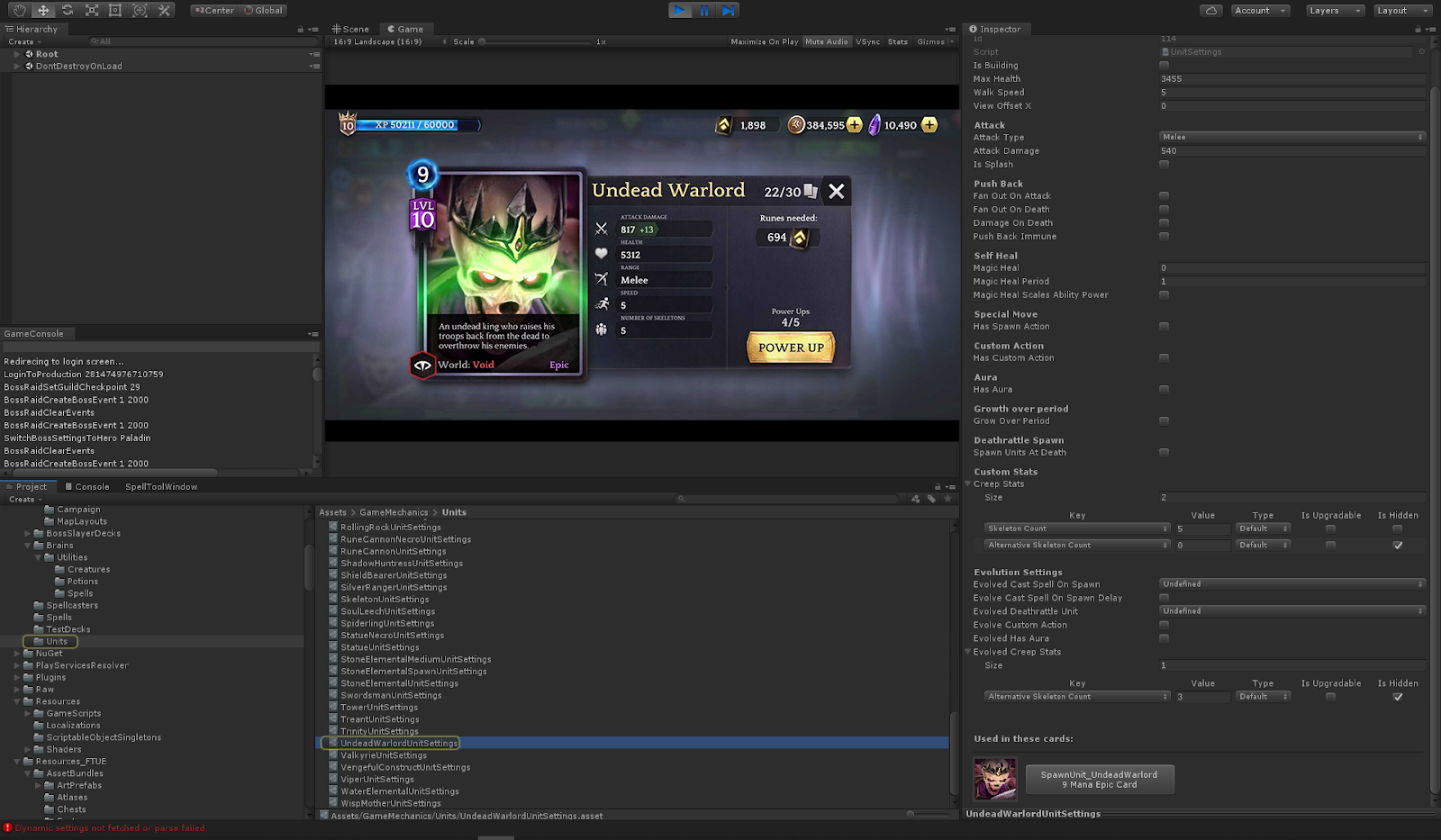 So now the build is in a testable state. It’s time to sit together and play it.

You gather your team and provide an outline of what everyone is going to play. More importantly, you specify what kind of feedback you are looking for. Once again you find yourself in the position of an orchestrator. 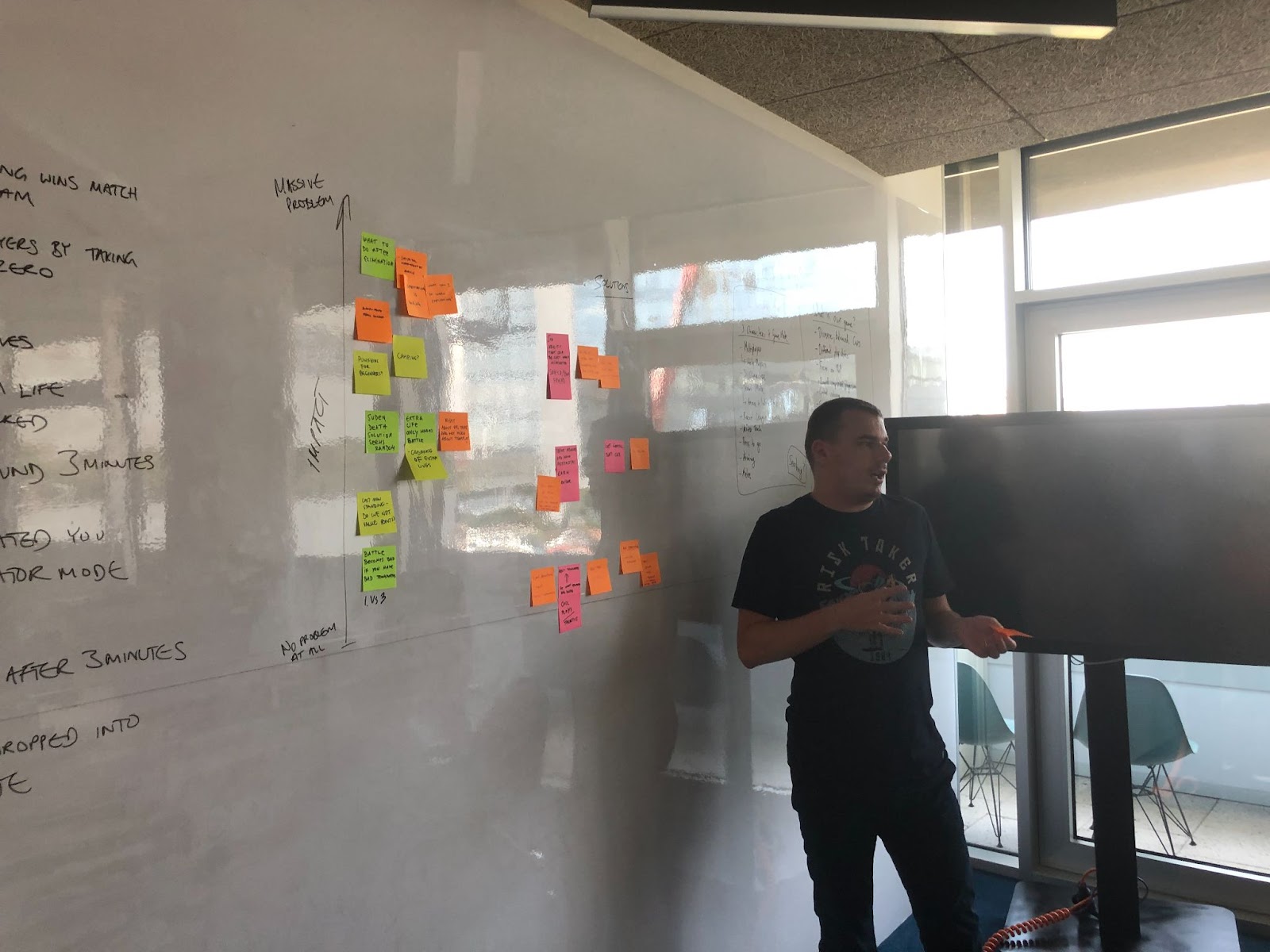 Your team is going to proceed to give you a lot of feedback. You care for it, but more importantly, you should care about how players behave with it. Watching other people play your game can give you incredible insights into whether or not the idea works.

Your team is going to instantly jump to ideas trying to solve problems they spotted while playing. Some of the ideas might not fit in with the direction of the game. By then, the room is awash with people pulling the game in different directions.

Game Designers are required to be resilient and stand for their vision and ideas. In addition to resilience, you also need to be permeable and accepting of feedback and suggestions. Taking critique and using it to alter/plus your idea creates an environment of trust and makes you approachable and available to change. Without fragility you wouldn’t have great ideas and iterations that can add to the vision. Remember, great ideas can come from anywhere. Your job is to foster an environment of creativity and guide your team through it.

Overall, the game has definitely improved and things are starting to look up. You collect everyone’s feedback, have a discussion about what needs to be done to improve the feature and call it a day.

TOMORROW IS GOING TO BE A GREAT DAY!

In a single day, each one of your skills has been put to the test. And no two days are alike. 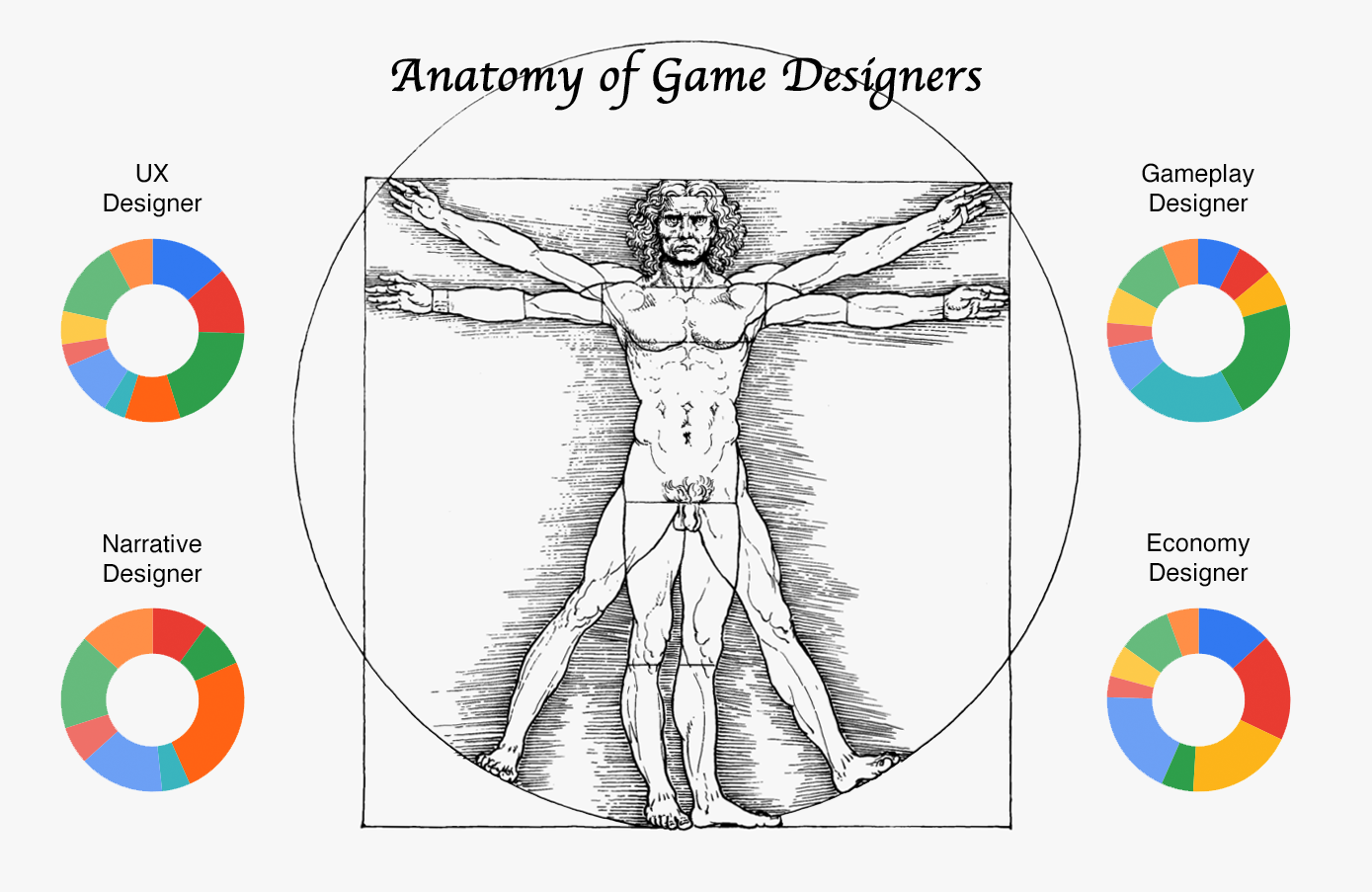 Think of it like creating a character in Role Playing Games. Designers start off with these stats at various levels and as we go through a journey of creating games our skills will be put to the test, and somewhere along the way we figure out what we’re really good at.