Belgrade, Serbia – May 7, 2020:  Nordeus are excited to announce the incredible 10th anniversary milestone of their award winning mobile game on Saturday May 9, Top Eleven. With over 220M downloads and a seven year partnership with the special one, Jose Mourinho, Top Eleven is the most successful mobile sports game of all time. The mobile game with a decade on the pitch has racked up a multitude of impressive achievements including 27 billion matches from the touchline, 262 billion minutes of gameplay and  a staggering 75 million League trophies won. 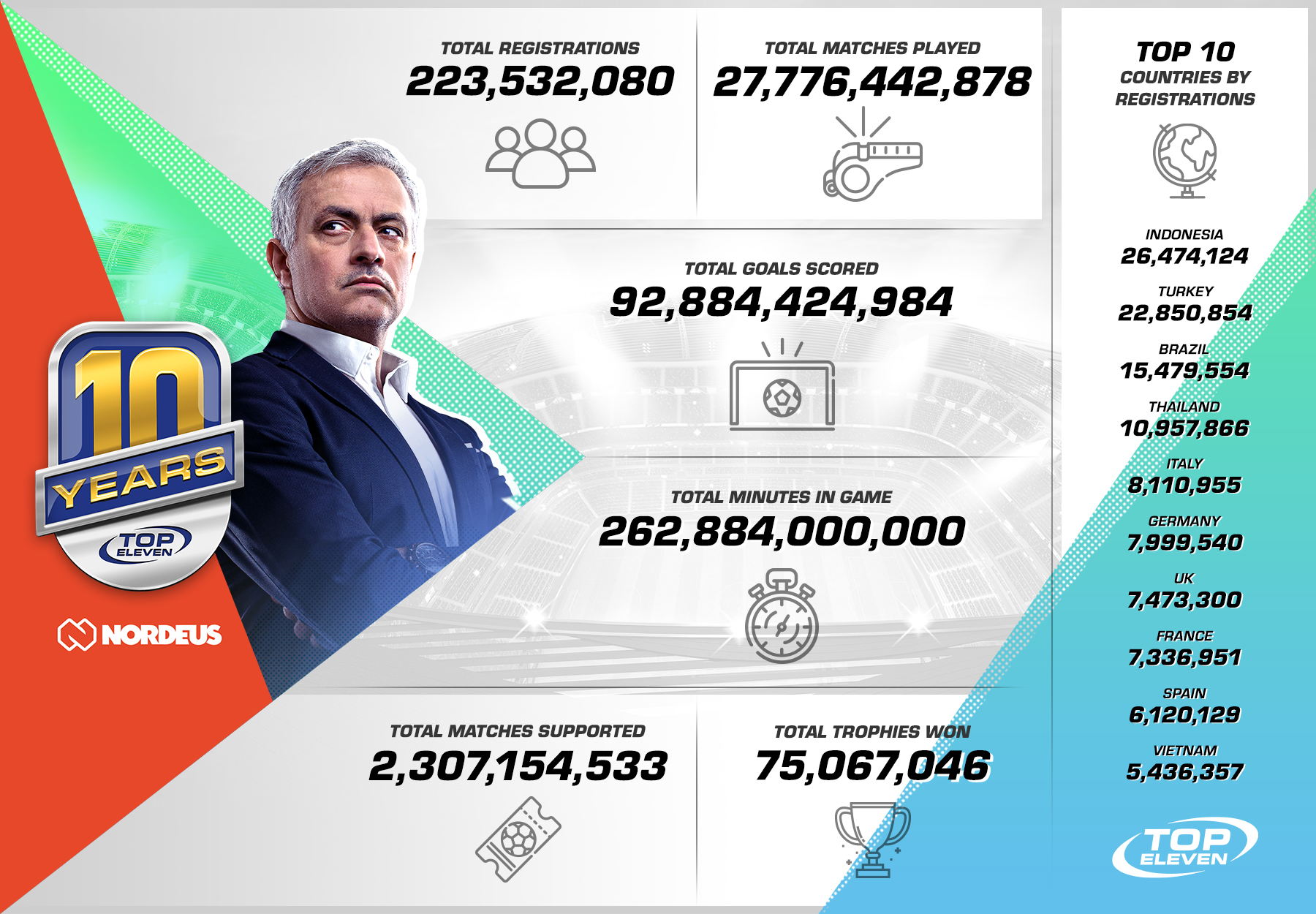 “Growing up, everyone wanted to be a football player, not a manager. Now I find lots of people dream to be a manager, and games such as Top Eleven have the responsibility to give kids a chance to be a manager every day,” said José Mourinho. “They learn by playing and enjoying the game, and they can learn the job of being a football manager… just like me.”

Founded in 2010 in Belgrade, Serbia by Branko Milutinović, Ivan Stojisavljević & Milan Jovović, Nordeus began life as three engineers channeling their passion for video games and battling against the odds to build a company. Initially working out of a converted garage, three junior developers with no prior game design experience worked together to create their first game, Top Eleven. Nordeus has now grown to a team of over 170, spanning 20 nationalities, based in a state-of-the-art office in Belgrade designed for creative freedom and collaboration.

“From the beginning we always envisaged growth, but even I could not have predicted such significant strides in just 10 years. Top Eleven is the game that put Nordeus on the map and helped the company become what it is today,”  said Nordeus CEO, Branko Milutinović. “Our goal was to develop and pioneer one of the most successful mobile gaming companies world wide, which we’ve achieved.  We have learnt a lot over the years and have changed with the industry, keeping up with trends and new technology. We couldn’t have achieved these goals without our dedicated players and hard work, ambition and drive from our people. But don’t think we are done yet, we have lots more on the horizon!’

Since launching in May 2010, Top Eleven has grown from its early success as a Facebook game, transitioning to mobile in 2011. During that time, Nordeus signed with one of the most successful football managers in the world, José Mourinho, to become face of Top Eleven in 2013.

Top Eleven kicks off their next decade with the anniversary update including a brand new feature and ways to play with friends and family. Team up and show who’s boss on the football pitch in the brand new Friendly Championship feature and take part in custom league competitions.  To mark the special occasion, rewards and gifts will be up for grabs throughout the season, and with a Special Sponsor Event plus daily gifts, there are always awesome rewards to pick up as you lead your team on the road to football trophies!

Download Top Eleven for free from the App Store and Google Play now.